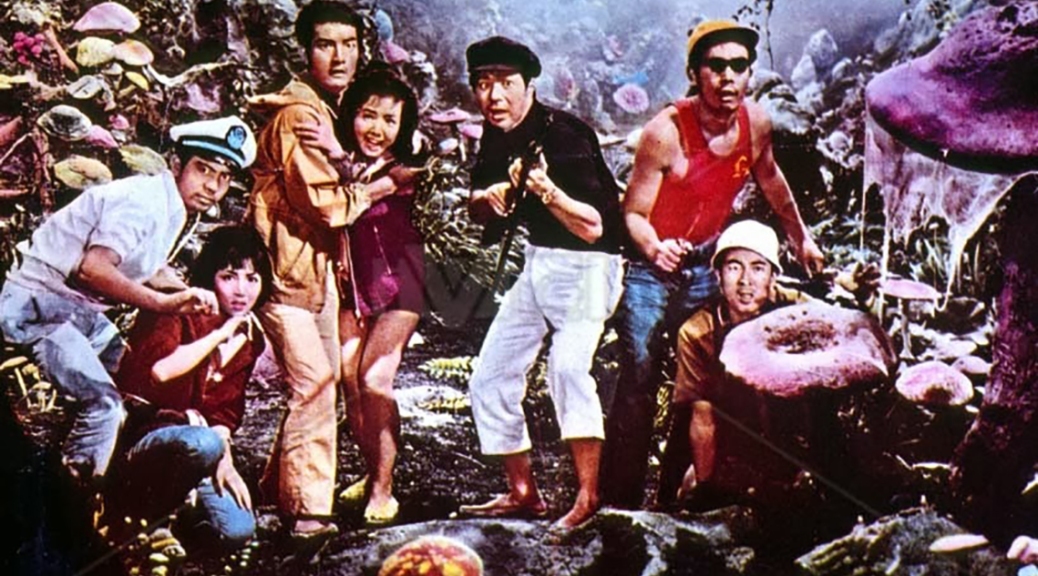 Also known as ATTACK OF THE MUSHROOM PEOPLE or simply MATANGO, Ishiro (GOJIRA) Honda’s horror film is partly based on the short story ‘The Voice in the Night’ by William Hope Hodgson.

The movie starts in a Tokyo hospital, where a man (Akira Kubo) recounts events that have led to him residing in a barred hospital room. The story then jumps back in time to tell the tale of a group of characters, including professor Kenji Murai, who are on a yacht that ultimately sails into a storm.

After the yacht almost capsizes, it drifts to a island where Murai and the others go ashore and begin to explore it. They find a dense forest and masses of mushrooms. A wrecked ship is discovered, food supplies are found, then begin to dwindle, there are conflicts as characters try to take control, and hungry members of the group decide to eat the mushrooms…

This movie is wonderful to look at, oozing atmosphere, with swirling island fog, a moody-looking shipwreck with ripped, decayed sails and misty, rain-soaked forest sets festooned with fungi. The art direction for the ship sets is top-notch: the various cabins are grungy and dirty, initially coated with a layer of fungus.

There’s also an abandoned lab in the wreck, which adds to the mood and mystery too, as do shots of rapidly-growing groves of mushrooms in the wet forest, with the sound of ghostly, girlish, echoing laughter playing on the soundtrack.

The effects of the mushrooms on the various people depends on exposure to the fungi: so we get to see characters mentally influenced after eating them, through to people with deformed, infected faces, and finally victims who have basically become human-sized perambulating mushrooms!

I was lucky enough to see a pristine new print of this film several years ago, when it was screened in a double bill with KING KONG VERSUS GODZILLA at the Prince Charles cinema in London. Joy!

If you haven’t seen MATANGO please seek it out and give it a go. If you accept the slow-burn pace of the movie at the start and soak up the eerie atmosphere you won’t be disappointed. It is a disorientating film, which initially has some jarring shifts in tone between comedic scenes, drama, a couple of musical numbers (!), mystery & horror. The way characters become deformed after ingesting the fungi adds the theme of body horror to the mix and, well, who can resist a film that boasts mushroom-headed fungi-beings shambling around a drenched island forest?!

Devoted to every kind of movie and TV monster, from King Kong to Godzilla, from the Blob to Alien.